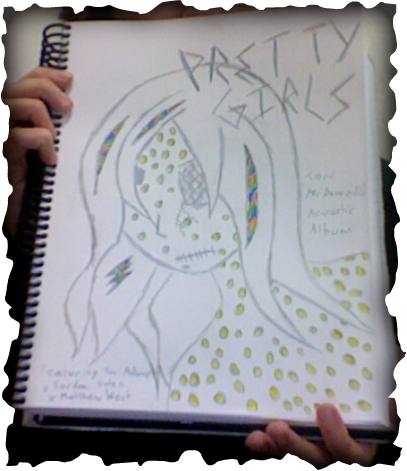 Hey, guys! Elektra speaking. The picture above is actually a rough sketch that isn't finished of an album cover for a project that I'm hoping to go forward with soon in the future.

It's called "Pretty Girls", and I hope for it to be an acoustic version of some of my songs, with the help of some of my friends. 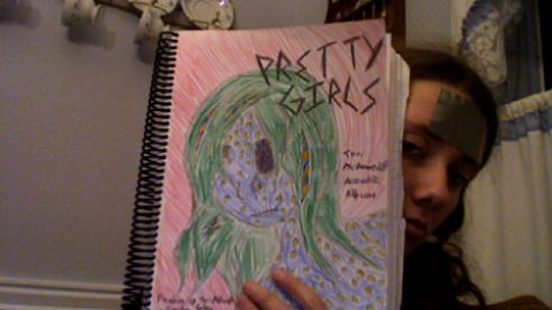 The color for the cover idea is done! Also, look out for a video or two of Elektra singing.

Is that duct tape on Tori's forehead?

Want to help out with the recording work? Will work for hugs? Contact Elektra at victoriamcdowell@northpointacademy.org

("I was just looking over the original written lyrics of Graffiti Rainbow and I felt rather disappointed in myself. I kept on switching between spelling it as 'graffiti', 'graffity' and even 'graffi'. You can tell that I was raised in safe little Prescott, Arizona when I don't even know how to spell graffiti. Even when typing this, I wanted to say 'grafitti'." -Elektra)

Looks like this project is coming along REALLY slowly...

I'm also reconsidering which songs I want to put into this album, along with what will actually be the Album Name and Cover. Hence, why I have a full page dedicated to album art ideas.

To help myself get going again, I'm challenging myself to become inspired at least 2 times a week for a song, and at least once from a set of topic challenges that I found at  LYRIC IDEAS FOR SONGS.


I know it probably sounds really weird, but I'm really trying to motivate myself here, and I'll do what it takes.

Also, I'll probably need to start looking for people to help me put together the album sooner or later...